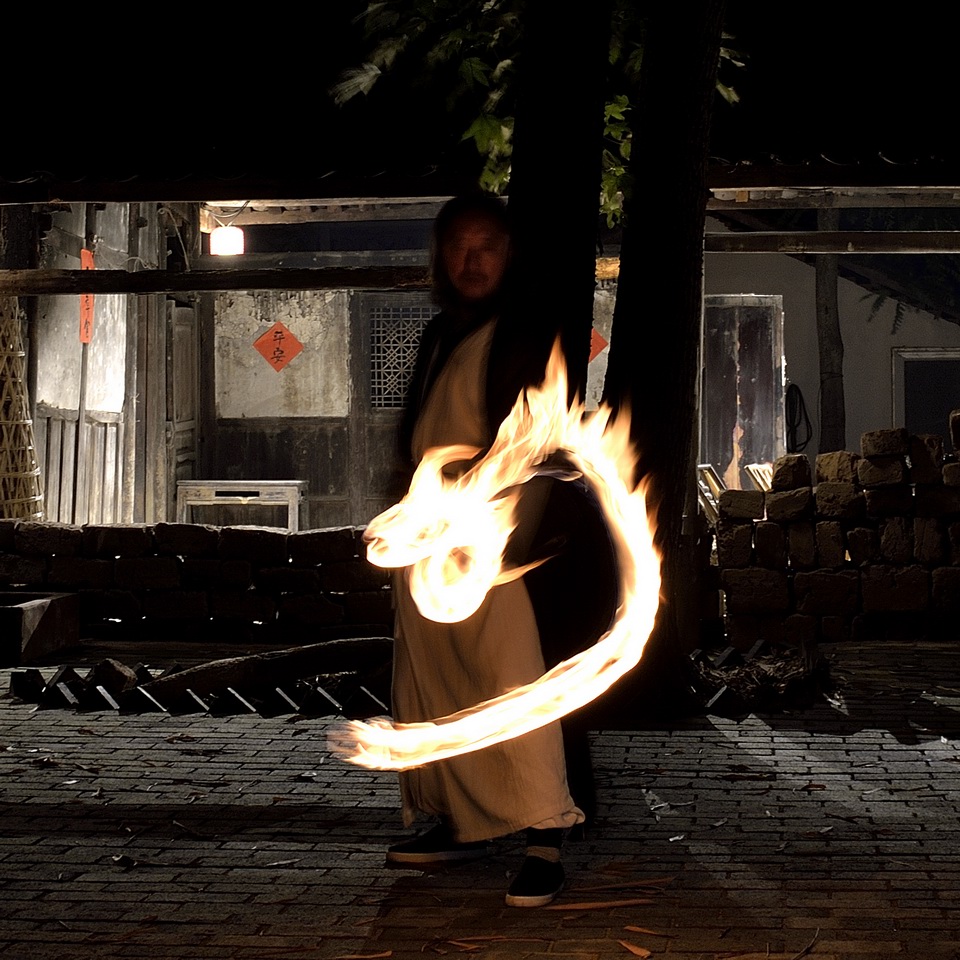 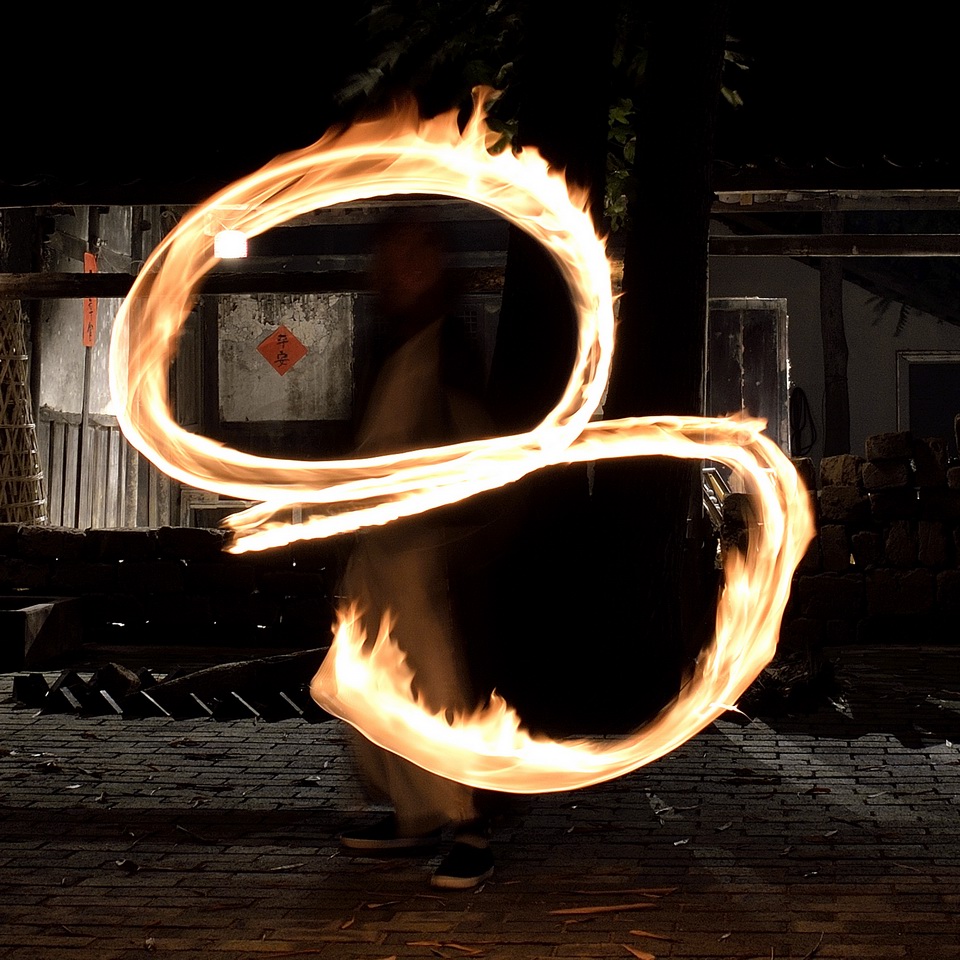 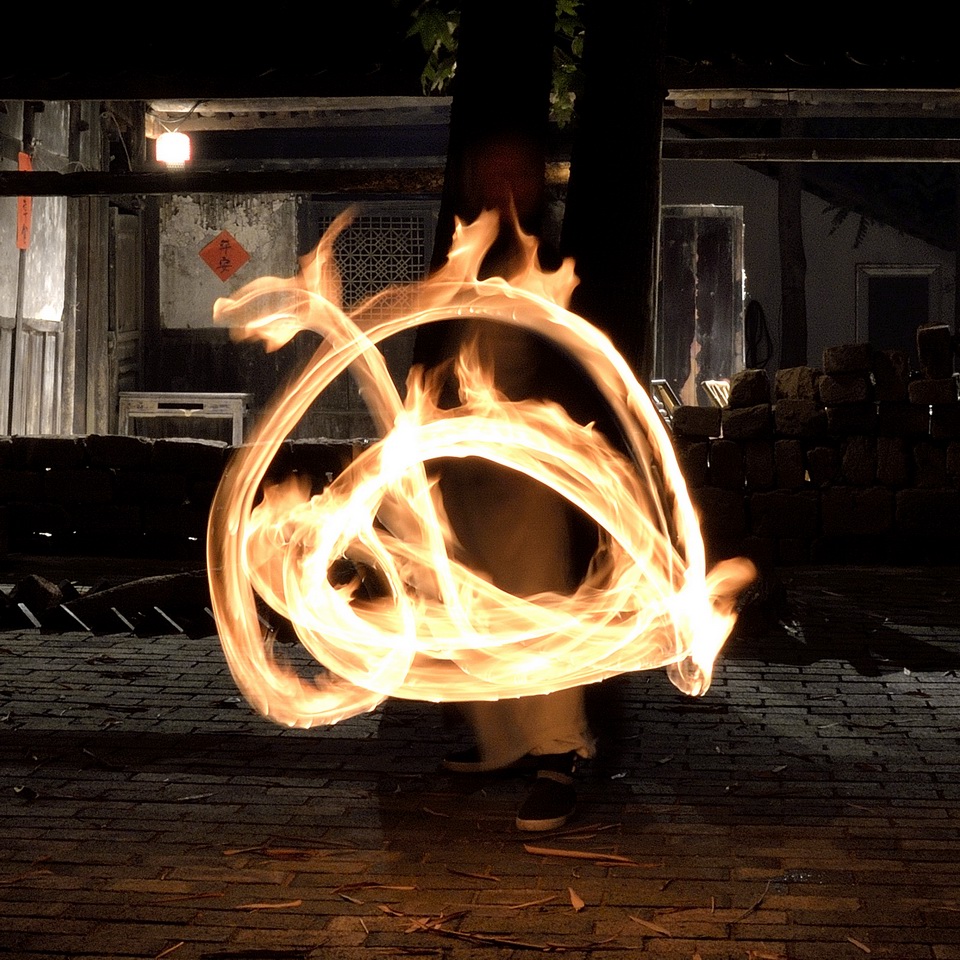 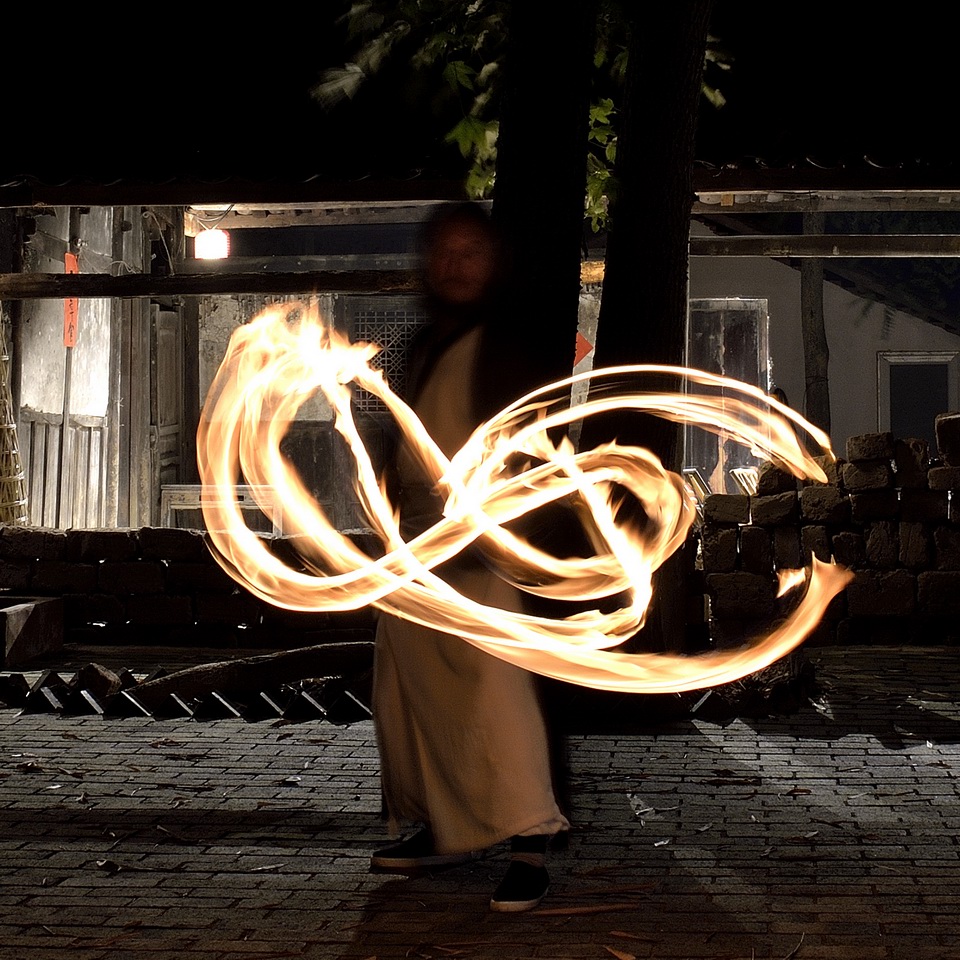 I’ve travelled to China in search of vestigial lighting. I was prepared to find warmth of tradition and inspiration of industriousness, but the Sichuan province presented me with an incandescent narrative gift that cooled my thirst for transcendence: the birth of a fiery dragon. A Tai-chi master, whose story I am yet to share, translated for me a crisp mundane spark into an entropic mythical beast. He thus dissipated into dream an illusion of immortality, by proving to me that even the most majestic creatures are ephemeral. The dragon is incrementally born, quixotically allowing himself to be hunted by my viewfinder, he battles the shadows surrounding my camera, and then, with a bamboo sigh, leaps into digital folklore. The Shifu’s hands seem to find rest within the operatic labor. I feel like I have been vouchsafed a mystical tattoo. I involuntarily look at my camera and can’t help but think: “Hic sunt leones!”

About the Dragon Master: Mr. Liu Suibin is his name and I didn’t ask about his age. His hands seem destined to tame paper and parchments, not to wield weapons. He is nimble in both movement and rest, yet his hair seems to remain undisturbed even by the most sudden gestures. He presents himself a little too calm for my immediate comfort. He is also a reluctant sport, a man of few indulgences when it comes to showmanship. Alas, that was precisely what I was looking for… or so I thought upon my arrival in an old traditional bamboo village, lost somewhere in the Sichuan province. I was rummaging for stories that would complement the images I was poised to capture. What I’ve found, however, was another architect! The truth is that, just as I use mortar, bricks, glass and steel to bring my own vision of equilibrium to life, Mr. Liu Suibin uses fire and isometric movements to build new spaces and to freeze-frame time in lightning. He has trained extensively to achieve such precision and finesse, thus being considered  one of the top 30 Chinese Tai-chi masters, a leading figure in the Chinese top 10 Traditional Wushu. Moreover, he is one fine Image ambassador for China’s Health International Forum, President of Sichuan Wushu Culture Research Institute and last but not least the Dean of Bashu Wushu and Healthcare Institute. I really like this listing of fantastic formal accomplishments that define somehow the personality of Mr. Liu. I also like to believe that people alike come together only under special circumstances, and probably once in a lifetime. If there is still magic to be found in this world of ours, this must be the only way one can catch a glimpse of it.

About the photo session: So, we met on a trepid midweek afternoon. A few hours later, for the sun is always irreverent to our imminence, the Master releases the Dragons for me. Our Dragons! The fiery beasts are thus birthed and projected upon my photo lenses, like an incandescent blueprint for a majestic bridge leading to a world we only know today through the boring gift of the CGI. My mind keeps splitting between childlike wonderment and teenage preconceptions of a tome-trapped Ouroboros that I was never supposed to see with my own eyes! My Medieval dragons were never playful, but threatening! They were always bellicose, never sensual! They were meant to keep me away from precious secrets, not to nudge me towards impulsive explorations! My Dragons were cautionary tales, not maps for transcendence! Could this be a life-defining difference between China and Europe?

The Dragon Master keeps his art flowing and I resonate his efforts with intrepid shutter clicks. We were supposed to work together for an agreed-upon three hours, which effortlessly turned with Mr. Liu’s approval and by my feverish request into nine hours of “dangerous photography” – the kind that captures the soul behind the geometry. After that night, I brought home with me not just a bunch of film rolls, but also bamboo-scented dragon dust and friendship.

Copyright © Alexandru Crisan 2020. All rights reserved. All images and texts featured on this website are under strict copyright regulations and require a license for reproduction in print or online. Any artwork cannot be used without written consent from its author. Please note that any unauthorized use of images from this website is in breach of copyright regulations. Detailed informations TERMS OF USE.